Recently, I had applied for Indian Visa for my daughter at BLS Visa Center in San Francisco. BLS was the service provider contracted by Indian Consulate in San Francisco. After the application, I got a mail that visa was approved and I could collect it. I had to travel out of the country on a trip and when I got back I went to BLS to pick up my daughter's passport. Things like this are never simple I guess. Here is a story of how Indian consulate has botched up the visa processing for people when they decided to change the service providers. 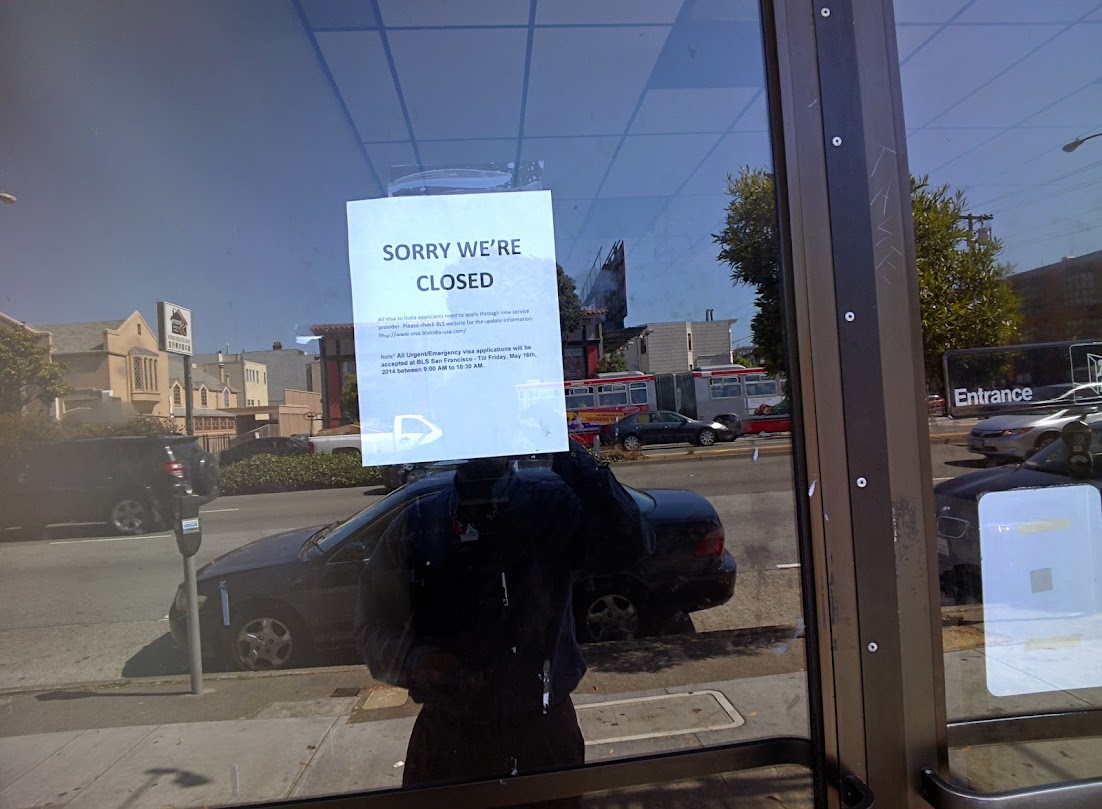 I went to the Indian Consulate website. Indian Consulate Office, please make your website mobile friendly. At the consulate site, there was some useful information that the service has been changed to Cox & Kings Global Services on Bush St. I picked the address and got a taxi to Bush st. I also found their phone number and called them. I was put on hold until I reached Bush st and I disconnected. I saw people lining out of Cox office doors and the line stretching down the block. As all Indians would predictably do, I joined the line. After a while, the people in the line started sharing their stories and hoped that they would get their passports today. People had come from San Ramon, Half Moon bay and Tracy. One of the Cox representative walks out and says that their computers are offline and they cannot do much. But they can collect applications and provide written receipt. When I asked about collecting passports, she pulled all the people that had come to collect passport and wanted to have a separate discussion. At that time, I did not feel any good about this at all. The story was getting only worse.

She told us that our documents are not with Cox and Kings (CK). It is still with BLS and BLS is refusing to give it to them. She said that CK are helpless and are waiting for BLS to give back the documents (aka Passport). Also, CK was ready to sue BLS if they do not provide documents soon. Now, the last thing we wanted to hear was a fight brewing between BLS and CK. And most important of all, they have my daughter's passport that I needed back. We asked to talk to the manager of the place. BTW, all this is happening on the curbside of Bush st.

Now, the manager comes out and he apologizes for this mess. He did seem genuine, but he repeated the same story. He could not guarantee when we will get our passports, but wanted to check back in 3 to 4 days. When asked about talking to the consulate, he mentioned that they do not have any such facility to talk to the Consular offices. It did not make any sense at all.

There were other people that had paid for express processing because they are going to India this weekend, but do not have their passports. They were amazed at the inefficiencies and the callous attitude of the service providers and inept handling of the transition by Indian Consulate.

Here is the video of a woman explaining her situation to Cox & Kings Manager.

All this was embarrassing and I hope Indian Consulate will find a solution to all those people who are caught between two service providers.

Karma - From a Bicyclist

This morning, I was on a bike ride and very quickly I went into backroads. The road did not even have shoulder and I was scared as hell for the cars that go very fast next to me. So I was watching things carefully and stopped on the side of the road, whenever I saw a trailer on my back. In a little while, I heard the hissing noise that all bikers hate - my front tube getting flat. I had a spare tube and co2 canister so I was not worried. I changed the tube quickly and as I was inflating the tire, the head that keeps the air in broke off and rendered the whole effort useless. So, I started to push my bike towards home at least 7 miles away. Some bikers asked if I needed help, but I decided not to disturb them as everyone would carry just one spare tube and they may need it. There was a guy biking on the opposite side of the road, stopped to ask if I needed any help and he would not take no for an answer. He gave me a spare tube (he had one extra), a new co2 canister and told me "Being top of the bike biking is so much better than on the side pushing". Well, I would not disagree. He was so generous with his parts that I wanted to pay him and he refused any payment. He said that was his karma, hopefully it will pay him back when he needs help. I hope so too. And I rode back - thanks to the unknown bicyclist. Bicycling on Sun morning is like going to church for me and has its unique lessons.

I've noticed that it gets very hard to blog everyday and when I see many blogging not one, many I wonder where they get the time. Well that is not why I am blogging this. Anyway to the matter here...

I've been following hotmachihot.blogspot.com, but he stopped his updates and I thought he was personally threatened by DMK folks.

Anway, I read Charuonline once in a while and I found by far the worst article by Charu. He writes a letter to Karunanidhi that makes me wonder whether he has joined DMK. I am no DMK/ADMK supporter, but his article plays this seesaw game of trying to balance out actions of the DMK leader. Some good, some bad. Also, Charu has never accepted anyone but his own group as the saviors of literature. But to add Karunanidhi as the savior of Tamil and accepting him in the ancestry of Tamil Pulavars , he has gone so low. Only his banian seems fancy but not his thoughts!

Thanks to Sun TV for getting me the songs of 70s, 80s and I am having a ball with them. Especially with the ones that has weird and unimaginative choreography and cinematography. Few samples:

I remember that exchanging the song cassettes with my friends for songs from this movie. Actually it is surprising to see Kaveri, who can be spotted in serials full of tears (probably thinking about her career path), in this song. The director decided to shoot this on a beach where one would not use a kodam (will the word bucket do justice...) and also dressed Kaveri up in a bridesmaid dress with kodam in one hand. I think these were mistakes deliberately made as it is inconceivable to shoot it in this form unless one just wanted to frustrate the viewers.

The heroine, whoever that is, is dressed up in a bharthanatyam costume is staying put in one place and makes some funny gestures with her body and hands. The singer sings, "Asainthu Asainthu aadungal", but she would not budge. Good fun.

Even though election just got over, Vikatan still has a hangover. Vikatan message looks like an election statement. Almost, personally written by Mu. Ka.

BTW, personally I do not have have anything against the magazine as I've enjoyed reading it all these years. Only thing of concern is the quality and trustworthiness.

Tickets for the world cup 2007 in the Jamaican islands are available for purchase. I like the follow the path of your favorite team tickets. They start at $375. And volunteering opportunity is available for Carribean national and residents. Wish I was living there. The fever has started already

Hey, what's up Tamil education in film songs. Vairamuthu started this bad precedence with "Atrai..Kotrai" and it has gotten us to "Alabadai". Soon, we will be dancing to Yuvan Shankar Raja's tune of Thevaram....